EuroCham recenty launched its two major publications, the 2018 Position Paper and the EU-Indonesia Economic Relation Study. Both papers were officially handed over to high government representatives including:

Meanwhile, the Economic Relation Study highlights the exchange of goods and services between the EU and Indonesia, as well as the amount of investment from the EU in Indonesia. It further illustrated the extent of relationship between the EU and Indonesia, which was shown by the USD 4 billion trade surplus experienced by Indonesia in 2016. The study also identified the opportunities and rooms for improvement

In the panel discussion during the pre-launch brief, Mr. Berly Martawardaya, INDEF Program Director & Team Leader of the study, explained the research team finding on bidirectional causality relation between Indonesian import from EU and EU FDI. Additional 1 % increase of import from EU caused FDI to increase 2.43 % in the following years, while additional USD 1 billion of FDI would increase the import by USD 2.14 billion in the following year.

This FDI-Import relation means that import, especially capital and intermediate goods, is necessary in order to boost investment, which in turn will grow the national economy. 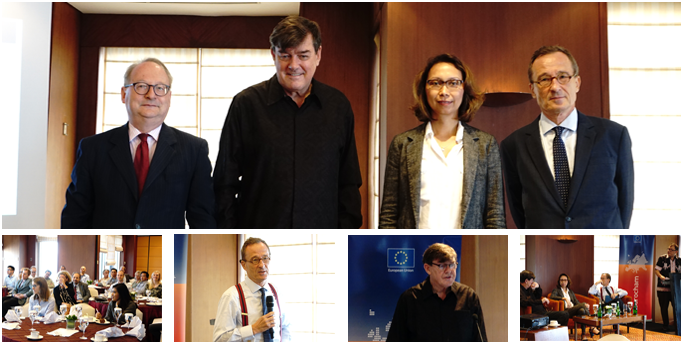 On Tuesday, 27 February 2018, EuroCham, in collaboration with Vriens & Partners, Dutch Bizz Breakfast (DBB), and the Embassy of the Kingdom of Netherlands, held a breakfast briefing entitled 2018 ASEAN Overview. Present at the event to give the opening speech was Mr. Samuel Siahaan, the Executive Director of EuroCham Indonesia.

The briefing offered insightful presentations and discussions regarding the relationship between the EU and ASEAN, particularly Indonesia’s standing compared to neighbouring ASEAN countries. EuroCham would like to thank distinguished speakers, Mr. Theodoor Bakker, the Vice Chairman of EU-ASEAN Business Council and Executive Board member of EuroCham Indonesia, Mrs. Nora Guitet, the Public Affairs and Communication Director for Indonesia & Malaysia Regions of PT Michelin Indonesia, and Mr. Hans Vriens, the Managing Partner of Vriens & Partners, for sharing their professional views and experiences. In addition, the participants of the event, consisting of EuroCham members and other relevant stakeholders, were also involved in a fruitful dialogue about the subject matter.